At the moment, I have three high-end communication receivers from 1950’s and 1960’s in my possession, and they are briefly introduced on this page. My purpose is to document the restoration of these units as the work progresses.

This unit is Collins 51J-4 (SN 2136), originally imported to Finland by the Finnish Defence Forces. I am the second civilian, private owner of the radio, and I do not have  information about its history or military use. When I got it, the receiver was poorly, even dangerously repaired and almost deaf. 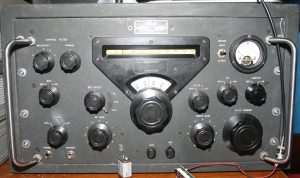 Collins 51J-4 is a 19 tube general coverage receiver (counting in the rectifier tube) between  500 kHz and 30.5 MHz. The frequency range is divided into 30 bands 1 MHz each, and the unit operates as single, double, or triple conversion receiver depending on the band. The first band selection oscillator is crystal controlled, and the IF stage following it has variable frequency that tracks the set frequency of the VFO.  The VFO is permeability tuned Collins  PTO 70E-15 operating between 2.000 MHz and 3.000 MHz. The last IF is 500 kHz, and the IF strip contains both a crystal filter (4 bandwidths with an adjustable phasing notch for suppressing unwanted heterodynes) as well as independently operated Collins mechanical filters (bandwidths 1 kHz, 3 kHz, and 6 kHz). At its narrowest, Collins 51J-4 is able to give the bandwidth of some 200 Hz suitable for CW reception, using the mechanical and crystal filters in series. The unit does not have a product detector but receiving SSB with 3 kHz mechanical filter and riding the RF gain is easy.

The sensitivity of the receiver on HF band is promised by the manufacturer to be better than 5 uV (re 10 dB S/N). This unit, after full repair and alignment, has sensitivity  better than 1 uV (re 10 dB S/N) in CW reception,  depending on the band. When in constant temperature, the unit is practically stable, and its frequency display with 1 kHz divisions has the accuracy better than 300 Hz in original condition.

[Details on the already ready restoration will be here.]

Details on the PTO repair and calibration
http://www.jarmomalinen.fi/repair-and-calib…llins-pto-70e-15/

This receiver is branded as Collins R-390A (SN 4170) but not all of its modules are manufactured by the Collins Radio Company. For example, the PTO was manufactured by Cosmos Industries. I am the third Finnish owner of the radio, and it was imported to Finland as a “scrapped surplus radio” in rather a bad state of repair (try “St. Julien’s Creek R-390A Massacre” in Google).

The SSB converter CV-591A (SN 10305) is manufactured by Technical Materiel Corporation, Canada, and it is at the Field Change Level 6. I do not know about the history of the unit, apart from the fact that its power source got a rather destructive short-circuit while in the use of the previous Finnish owner. 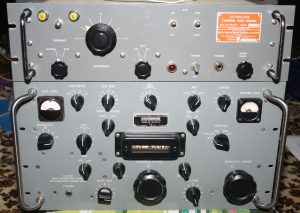 R-390A is regarded by many amateurs to be the finest receiver of the tube era. The receiver is a 26 tube general coverage receiver between 500 kHz and 32 MHz. As in 51J-4, the frequency range is divided into 1 MHz bands, and the unit operates either on double or triple conversion depending on the band. The first band selection oscillator is crystal controlled, and there is, of course, a variable frequency, tracking IF stage next to it.  The VFO is permeability tuned Cosmos industries PTO 70H-12 operating between 2.450 and 3.450 MHz. The last IF is 455 kHz, and the final IF strip contains four Collins mechanical filters (bandwidths 2 kHz, 4 kHz, 8 kHz, and 16 kHz). The narrow bandwidths at 100 Hz and 1 kHz have been realised with an additional crystal filter (no phasing notch). There is a very narrow audio filter at 800 Hz for CW reception, too.

In contrast to 51J-4, also the BFO  in R-390A is permeability tuned, with model number 70J-1. The receiver R-390A itself does not have a product detector (should one need it), but product detection is provided by CV-591A instead.

The sensitivity of Collins R-390A specified by the manufacturer is better than 5 uV (re 10 dB S/N) in AM reception, and  better than 1 uV (re 10 dB S/N) in CW reception. These are conservative figures, and somewhat better results can certainly be obtained by careful alignment. Even more than 51J-4, the receiver is practically stable, and various temperature sensitive oscillator components can be kept in constant temperature by ovens. The heating is switched off in all of these legacy receivers to prevent excessive ageing of components.

The restoration of this unit was started by Ilpo J. Leppänen in 2011 who did exceptionally good work on recapping, repairing the antenna relay units, replacement of the 8 kHz mechanical filter, etc.  The documentation on the restoration work is http://ijl.mbnet.fi/r390a_urr.html. Instructive videos about the earlier work on this unit by IJL can be found in Youtube https://www.youtube.com/watch?v=gQYw9dIoaKY.  See also http://www.penan.net/dx/r-390a.htm  describing the same unit.

I have repaired a cable harness problem in the AF strip and a  defect in IF module to get the receiver “generally functional”. Many defects remain to be addressed before full alignment can even be attempted. For example, the mechanical alignment appears to be incorrect since the upmost band does not properly engage. At the moment, the receiver shows great promise but it is, unfortunately, far from the original specifications.

The restoration of the TMC CV-591A SSB converter is my recent work, documented on this page:
http://www.jarmomalinen.fi/repair-of-tmc-cv-591a-ssb-adapter/

This unit is Hammarlund SP-600 JX-21, originally imported to Finland by “Posti- ja lennätinlaitos” (the Finnish monopoly of post and telegram traffic between 1927–1990) for use in their HAM station. I am the second private owner of the receiver. 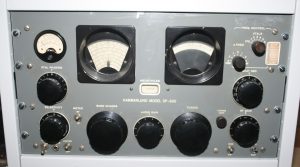 The receiver is installed into a rack cabinet manufactured by Hammond. The receiver seems to be in original “mint” condition (apparently including the unhappy capacitors as well), and surprisingly, everything works. It also appears to be quite sensitive as it is, but the frequency scales and the BFO setting are inaccurate.

One cannot expect the same kind of stability and tuning accuracy from SP-600 as from Collins receivers because of its technical solutions. I would, however, rate the user experience much higher: tuning a Collins receiver is like cranking a mechanical cash register whereas SP-600 tunes smoothly and effortlessly.  Hammarlund SP-600 has a very good sound quality on AM, in particular when operated on the widest bandwidth setting of 13 kHz.

I will add a technical description later on this page.

Are these military communication receivers any good in today’s standards?

It would be quite daft to claim that over 60 years of technological development would not show in performance and usability.  Let me compare a modern receiver (though I do not possess any such) with Collins 51J-4 of which I have most user and service experience.

Firstly, a Collins 51J-4 is a complicated receiver to operate. Because of its technical solutions for keeping the weight in some reasonable limits, the even and odd bands are operated in a different manner. To use the filters and the crystal notch effectively, one must understand the spectral structure of the transmission mode. Tuning to a SSB signal and balancing the carrier injection level by RF gain takes some practice which is unavoidable with a receiver having an envelope detector instead of a product detector or something even more advanced. A user of  a microprocessor controlled, frequency synthesis PLL receiver does not have to care about these matters. Just type in the frequency and the transmission mode, and that’s it.

Secondly, how about the sensitivity? Modern receivers affordable to HAMs and DX listeners are a few dB more sensitive than a perfectly aligned 51J-4, at least based on manufacturers’ documentation. We are, after all, speaking about sensitivities much under 1 uV (re 10 dB S/N) in CW reception.  Because I do not own a modern communication receiver, I have not been able to make proper comparison measurements. Some rather inconclusive, technically poor  listening comparisons can be found in Youtube.  However, my 51J-4 appears to be so sensitive that improvements in any other detail of the environment, including the antenna and reduction of local disturbances, would be much  more profitable than getting more sensitivity to the receiver itself.

Thirdly, can we speak about stability in tube HF receivers? Most often no, but in the case of Collins (PTO tuned) and Racal (Wadley loop) receivers, yes we can. As the first oscillator is crystal based (though not ovenised) in 51J-4, the leading source of instability in a well-serviced unit is the VFO, i.e., PTO 70E-15. I have reconditioned such a unit up to the point where it seems to drift within the limits narrower than, say, 2 Hz (at the set frequency 2.5 MHz, after a proper warming up period) in constant room temperature when coupled to a stabilised voltage source, even if the oscillator is not hermetically sealed. Here, the upper limit of 2 Hz represents the (estimated) measurement accuracy of the frequency counter that has to average over 1 s to give the last decimal. To obtain a more meaningful figure, one should have better equipment for properly measuring the full Allan variance of the unit. I would, however, be surprised to observe frequency excursions larger than, say, 100 mHz in a modern, synthesis based PLL receiver even without locking it to an external high stability reference.  But then again, I do not know for sure.

What are the advantages of Collins 51J-4 or R-390A compared to modern receivers? It is difficult to overdrive a tube based front end, there little phase noise and, obviously, no quantisation noise at all.  Moreover, a tube based rig can always be repaired if you have the skill and extra tubes available, and it is likely to survive the EMP should a nuclear weapon happen to explode in the ionosphere.

And when everything else fails, a tube receiver still has its considerable inertia and gravity mostly intact. You can use it as a boat anchor as it is unlikely to float.